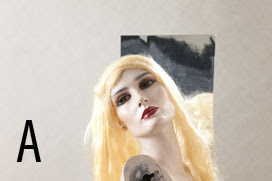 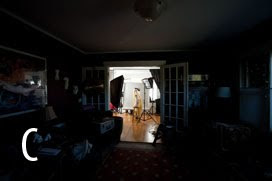 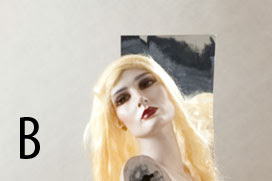 Answer, 16mm. But cropped in to show the same angle of view as the 300mm. Determination? The 16mm and the 300mm show the exact same perspective.

Photographs taken with different focal length lenses, but from the same camera position, show exactly the same perspective in the section of the scene that is common to all the different angles of view of the various lenses. Perspective is not affected by focal length, but by camera to subject distance. Short lenses appear to stretch perspective because we tend to use them from in closer. Long lenses appear to compress images because we almost exclusively use them from further away. We don't use long lenses in close because their field of view is too narrow and they often cannot focus as close as we would want. So we move back to get the framing we want, and thereby affect the perspective.

What would happen if we used the 16mm lens but moved in closer to fill the frame the same as the 300mm? Then we see the drastic perspective change... 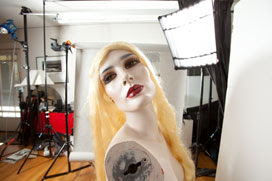 Again, the perspective change is from moving the camera. The wide angle lens allows us to get in this close and be able to capture the full scene. But it doesn't cause the effect.