Is it in Focus?

I recently wrote about lenses and perspective. In there I mentioned following up with a post about depth of field. I assume that most of my readers are familiar with the term. If you need a refresher, I suggest starting with this Tutorial from Cambridge in Colour.

The main control we have over depth of field is the aperture of our lenses. Wide open (lower number f/stops) we get less depth of field. As we stop down (larger f/numbers) the depth of field increases. But stopping down the lens can have negative effects, too. Small apertures lead to an effect called diffraction that lowers the image quality. Think of what happens when you put your finger over the end of a faucet. The smooth flow of the wide open faucet turns into a wild spray. So, you can stop down too far and get a lot of depth of field, but with an overall loss of image quality. What aperture you start to suffer diffraction at will vary with sensor size and specifications. Too much math to go into here, so I suggest you take a visit to Cambridge In Colours excellent tutorial on diffraction. While there, read all the other tutorials. This guy is good!


I just wanted to cover some of the questions that might come up when looking at the images in my most recent post about focal length and compression. Consider these two images

They were both taken at f/5.0, but the top one, taken with a 24mm lens shows the grid patter in the background more in focus than the lower image taken with the 85mm lens. Well, of course. We've all been told over and over that you get more depth of field with a shorter lens. But is that really true?

It is partly true. In this case it is true because the images were taken from the same camera position and the one taken with the 24mm lens was cropped in from this original

So, we do see more depth of field, but at a considerable loss in resolution. The image taken with the 85mm lens is 3744x5616 pixels, while the crop from the 24mm lens is only 995x1492 pixels. That's fine for a 3x5 print or for use online. But not for much more. If you need to print an 8x12 or larger the lack of pixels is going to be a much bigger issue than the extra depth of field you gained by using a shorter lens--unless that non-cropped version of the photo is really what you wanted.

What if you decided to move in closer with the 24mm lens to get the subject to be about the same size in the frame? Then you do get your full 3744x5616 pixel image. But it is a very different image. The look of the subject is totally different as seen here... 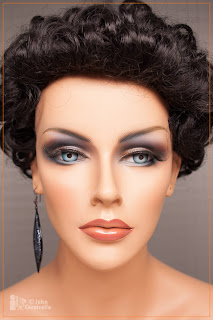 And the depth of field has shrunk back to where it was with the 85mm! What's with that? The shorter lens is supposed to give more depth of field, isn't it? Yes, when used at the same camera to subject distance. But when you move in to get the same framing you counter that.

The fact of the matter is that focal length alone is not a contributing factor in calculating depth of field. You need to combine focal length with the camera to subject distance. So, it is more like magnification in the original image is the contributing factor. If the main subject is the same size on the sensor with a long or a short lens the DOF will be approximately the same.

For these the camera was moved to try to maintain about the same size head in both frames (same magnification). Here we see that the images taken with the 35mm lens and the 200mm lens exhibit similar depth of field. The yellow text on the black disc in the background is blurred about the same. The overall effect of the 200mm vs the 35mm appears that the subject stands out more in the 200mm version. But that is more about the limited field of view behind the subject. The blurriness is about the same in each, but there is a lot less background to be noticed in the photo taken with the 200mm lens. In the photo taken with the 24mm lens there is a lot going on in the background, and despite being equally out of focus there is more context available for our brain to tell us what is back there (fence, table, my wife Kim, etc.).

And overall, the image quality on the 35mm photo is lower, as seen below...

Both of these images were taken at f/22. As noted in the last post, the perspective is the same (camera and subject weren't moved, I just changed lenses). But if we enlarge the center section of the 35mm shot we get this...

Here we can see the 35mm image has more depth of field (the text on the black disc is not as out of focus), but suffers a lack of contrast and overall loss of edge detail that I am chalking up to diffraction. Here is another comparison. This time both images are taken with the same lens in the same position, but one is at f/16 and the other at f/2.8. While the f/16 version has greater depth of field, the f/2.8 version appears more crisp and contrasty. I admit I added to the challenge here by working in less than ideal conditions with strong backlight. But this is a situation we often find ourselves in.


Anyway, I just want you to stop and think about the generalizations we hear every day as we learn about photography. Telephoto compression, stopping down for better images, focal length and depth of field, etc., etc. All of them have an element of truth to them. But they are often only half the story.

I end this as I started, by suggesting you visit the Depth of Field and other tutorials at Cambridge In Colour where they go into great technical details.

And after that please go out and do your own experiments. Then share what you learn in the comments here.