Quiz Answers or Focal length, Perspective, and Depth of Field.

Answers to the quiz from the previous blog entry...

All three images were taken at the same aperture (F/11)

What I hope to have shown here are:

You set up your camera-to-subject distance to give you the perspective you want and then you select the lens (focal length) that fills your frame at that working distance.

Note that the image quality in Example C is lower than in A and B. It is kind of grainy and the star on Wonder Woman's forehead is not quite as crisp. That is because I enlarged a very small section of the full frame to match the angle of view of the longer lens. Here is the full frame image that Example C was cropped from (Examples A and B were already shown as full-frame). 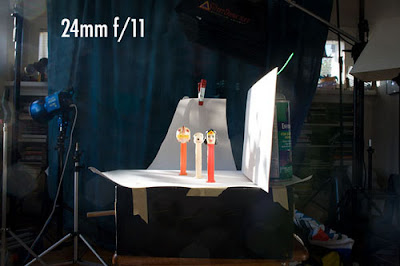 Going back to the Quiz examples, A was taken with a 24mm lens and B was taken with a 100mm lens. That accounts for the different angles of view. The 24mm lens takes in a wider angle of view and you see more of the background. What changed between the two images (besides the lens used) is the distance between the camera and the Pez dispensers. I moved the camera closer for the 24mm image to try to get the Wonder Woman dispenser about the same size (same magnification) in both images. By moving in closer with the 24mm lens the perspective changes because the relative distance between the items in the scene is increased. The 100mm image looks more compressed because it was taken from further away (not because of the longer focal length lens).

Both were taken at f/11. The magnification of the main subject in both images is about the same. At the same aperture the depth of field is about the same, despite the difference in focal length (24mm vs 100mm).

That brings us to Example C. This image is also taken with the same 24mm lens at the same f/11 aperture. But now the depth of field looks greater. Why?

In this example the camera was moved back to the same position as it was in for the 100mm image and a small part of the image was cropped to the same field of view as the 1oomm image. Now the depth of field is greater (the subject was not magnified as much in camera). Also note that the perspective is the same as the 100mm image (because the camera to subject distance is the same).

So now the depth of field is greater, but quality suffers due to having to enlarge the image. With the relatively grain-free quality of low-ISO digital the quality loss is not as detrimental to the image as I would have imagined. In film, such a severe crop might not work out so well.