More On Aperture and DOF

This is a follow up to my recent post about the effect of aperture on the look of a portrait.

There, I mentioned that changing focal length would not affect the depth of field if the camera was moved to maintain the size of the subject in the frame. I didn't have any images prepared then to demonstrate this at the time. I got a chance to create those images last night and present them here. Click on each image to load a larger version that will be easier to study. 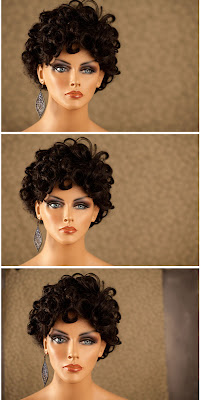 Above we see three photos that were taken with 135mm, 85mm, and 35mm lenses all set to f/2.8. The camera was moved closer with the 85 and even closer with the 35 to make the mannequin head be about the same size in each. If you look closely you will see that the depth of field is about the same in each. The perspective is different in each because the camera was moved (not because of the lens change).

Many photographers go for a lens in the 85 to 105mm (full 35mm frame) range for portraits because they put you at a distance from your subject that gives a nice drawing to the face with pleasing relationship between the features on the face and head (nose, mouth, eyes, ears). If working with a smaller sensor camera look for lenses with similar angles of view for that format (such as 50-65mm on cameras with a 1.5 or 1.6x multiplier). 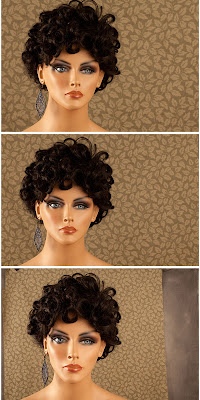 In the second set of photos everything is the same as the first set, except that the aperture was set to f/22. Again, you can see that the depth of field remains the same, even though various focal length lenses were used (135, 85, and 35).

You may also be surprised to see that the face looks the thinnest in the image taken with the wide angle lens. This is what happens when you move in close. With any lens the objects closest to the camera appear larger than objects further away. When in so close with a short lens the nose is relatively closer to the lens than the cheeks, eyes, and ears. So they fall away and look smaller. When you move back with the longer lens the nose, eyes, and ears are all relatively closer to each other than to the lens, so the face flattens out and they all appear at a similar size. This is due to the camera to subject distance, not the lens, even though this is often erroneously called "telephoto compression." See the fourth set below for more about that. 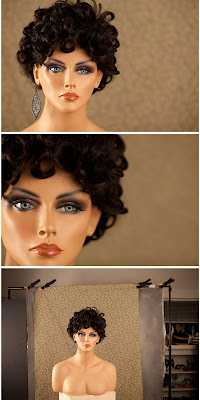 In this third set of photos the camera remained stationary. The top image was taken with an 85mm, the middle is 135mm, and the bottom is 35mm. Here we can see that the size of the mannequin head is very different between the images and the depth of field changes drastically between because of the difference in magnification from each lens (all set to f/2.8) 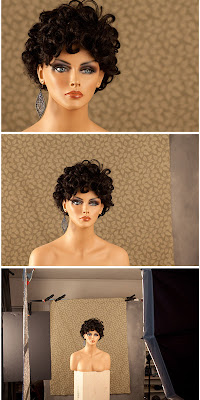 In this final group we again have images taken with the 135mm, 85mm, and 35mm lenses, this time all set to f/5.6. As in the third set, the camera remained stationary and the lenses were changed.

In these last two sets of images you should be able to see that the perspective remained the same even though the lenses were changed. The relationship between the head and the background is the same in each. If you cropped in on the 3rd image in this set the perspective would match the 1st image in this set. But the depth of field is different. Remember that when the camera to subject distance is set and the lens is changed the perspective of the area of the image that is common to each image is the same. The camera to lens distance determines the perspective. The focal length determines what fits into that frame.

One of my favorite Ansel Adams quotes is "good photography is about knowing where to stand." I think that many people misunderstand this quote. They might associate it with Jim Richardson's quote "if you want to be a better photographer, stand in front of more interesting stuff."  But what I believe Ansel meant was that you need to find the location to set up the camera that gives you the perspective (relationship between items in the scene) that you want, and then you select a lens focal length that fills the frame the way you want. Too often people pick the lens first.

I really don't like the mantra of "zoom with your feet." Zooming implies making the scene smaller or larger while maintaining the perspective by changing focal length without moving. If you move your feet the perspective changes. So you CANNOT zoom with your feet. I'm not saying it is a bad exercise to select one prime lens and learn how to use it by moving around. If you want to make good and interesting photos, do find your location by moving your feet, but then select the appropriate lens to fill the frame of your camera. Maybe the frame should be "move your butt!" And a zoom lens is the perfect lens for this, as you can frame exactly as you want. Zoom lenses got a bad reputation in the 1970s when the quality wasn't nearly as good as prime lenses. Zoom lens design has come a long way since then and today's zooms come very close to the quality of prime lenses. That said, I often use prime lenses instead of my zooms, but this is primarily because of the weight of a good zoom. The primes are easier on my shoulder, elbow and wrist.

One more thing. Something that I learned during the exercise of preparing this article is that it really is difficult to manually focus a wide angle lens. I've always heard that short lenses were more difficult to focus, but it reallyshowed here. The following set of images were taken with the same camera/lens (35mm at f/2.0) combination. A was manually focused through the viewfinder. B was manually focused using Live View at 10x, and C was autofocused. Maybe autofocus isn't such a bad idea....

Posted by cornicello at 7:12 PM