A Matter of Perspective

A common misconception is that lens focal length affects perspective.

Perspective is the image relationship between objects in a scene. This relationship is determined by the distance between the camera and the subject. You select the camera/subject distance to set the relationship you want and then you select the focal length of lens that will fill the film format you are using. Pretty basic—but often confusing.

Everyone knows that wide angle lenses make things look expansive with a lot of space between objects in the image and that telephoto lenses condense everything and make items in the scene look compressed and close to each other. And that is true. But it is not because of the focal length of the lenses being used.

When you are close to your subject you generally need a short (wide angle) lens to capture the scene. In the scene you may notice that objects very close to the camera appear to be much larger than similar sized images just slightly further away from the camera. This is not caused by the lens. It is a result of the front objects being relatively much closer to your camera than the further objects. When you are farther away from the subject you often use a long focal length (sometimes called telephoto) lens. In those images the relative distances between the camera and the subject and the distance between various objects in the scene are greater (the objects in the frame are closer to each other than they are to the camera) and the objects in the scene appear to be compressed closer to each other. Again, this is because of the distance between the camera and those objects, not because of the lens. The lens is just selected to fill the frame. Take the photo created with the short lens and enlarge it and you will see that objects in the distance have the same perspective as if they were taken with a longer lens and enlarged less.

Let's take an example of shooting a portrait. You typically want to be at least 6 feet from your subject when taking portraits. This sets up the relationships between you and your subject and between your subject's features (such as their nose, eyes, and ears). Let's say that the distance between the tip of your subject's nose and their ear is 6 inches. The camera to nose distance is 6 feet and the camera to ear distance is 6.5 feet. The ratio is 12:1. This gives a pleasing relationship and looks good. Now if you move in closer to your subject, let's say 3 feet, the nose to ear distance has not changed. The nose is now relatively much closer to the camera (ratio is 6:1) than the ear and it will appear to be too large giving your subject a distorted appearance. The distortion is caused by the closer subject distance. If you were able to focus a telephoto lens on the camera at the 3 foot distance you would see the same distortion as you do with a wide angle lens.

The difficulty in comprehending this situation is that you can’t focus the telephoto lens that close and, even if you could, the angle of view of the telephoto wouldn’t show enough of the subject to see the problem clearly. It might be easier to understand this by saying that a short/wide angle lens will allow you to see this perspective distortion because you can get so close, you can’t do that with a long/telephoto lens. Photographers tend to use a wide angle lens in situations which causes them to blame the lens for the distortion when the lens is just showing what it sees.

It is easier to demonstrate this by turning the situation around. Set up your camera on a tripod and have a subject seated 6 feet away from your camera. Take two photos; one with a long focal length lens and the other with a short focal length lens—do NOT move the camera or the subject between the shots. You should end up with one image (take with the long lens) having a larger subject than the other. Now open both images side by side on your computer and enlarge the image taken with the short lens so that the subjects face is the same size in both images. Note that the face looks exactly the same. No distortion "caused" by the wide angle lens. As stated earlier, you select your distance from the subject to set the relationship between the nearest and furthest objects in the scene, and then you select the lens whose focal length will fill the format of your film. Images taken with a short focal length lens will have a greater feeling of space and images taken with a long focal length lens will have a compressed feeling of space.

Remember that wide-angle is relative to the size of your film or sensor. If you are using a large format 8x10 view camera a 150mm lens is considered wide angle. On a 35mm camera 150mm is not.

(click on the images below to see larger versions)

The images above were all taken from the same camera position. The camera was on a tripod and not moved between exposures, only the lenses were changed. The first shot is with a 16mm lens, the second with a 35mm, and the third with a 135mm lens. If you enlarge the section of the photos showing the head (as seen below) you will see that the relationship between the size of the objects (nose to eyes to ears, head to the window behind it, etc.) do not change (though depth of field does change, more is in focus in the image taken with the shorter lens). Even though we’ve used a super wide angle (16mm) and a telephoto (135mm) the perspective has not changed because the camera to subject distance has not changed.

The above images are selections from the original photos in the first row. They have been enlarged so that the head appears at approximately the same size in each frame. They show that the relationship between the head and the background does not change when the camera remains in place and just the lens is changed. There is no change in perspective.

In this set of images the camera was moved closer to the subject for the 16mm and 35mm versions to approximate the same head size. This shows how the perspective does change when the camera to subject distance changes (from 6 feet for the 135mm photo to a foot or less for the 16mm photo. The perspective change is because the camera distance has changed, not because of the focal length of the lens.

The image below attempts to simulates what it might be like to be able to take a photo from this close with a long lens. The full frame is taken with a 16mm wide angle lens. The box in the center shows what a longer focal length lens would see IF you could focus this close. The distortion would still be there, even though you are using a telephoto lens. 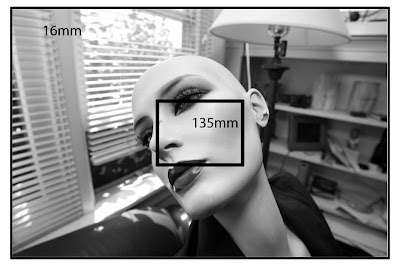