Many of you have probably known The Bobs longer than I have, but for a few of you, this may be an introduction. The Bobs are a great a cappella group who I recently got to work with on new publicity photos. I've been holding them back, but they recently released this on on their Facebook page, so you get to see it here, too... 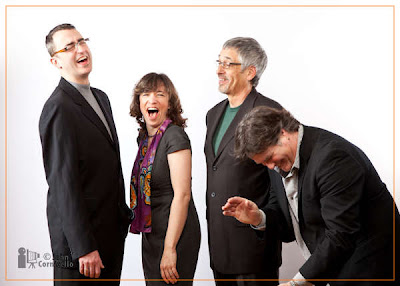 Come out and see The Bobs at the Moisture Festival where they are described thusly, "This is not your run-of-the-mill a cappella quartet -- not by a long shot. Now in its third decade of musical mayhem, The Bobs’ Grammy-nominated musical gymnastics combine astounding vocal agility, deliciously ridiculous original pieces, and wildly imaginative arrangements of tunes by the likes of the Doors, Kurt Weill and the Beatles."

Posted by cornicello at 6:31 PM