This morning I saw a great video on Inverse Square from Mark Wallace on Adorama TV on YouTube. He did a good job of showing how the relative distance between subject/background affects the exposure of both.

The law basically says that the amount of light falling on a subject is inversely proportional to the distance between a point source of light and the subject. So, if you double the distance between the light and subject the amount of light reaching the subject is not cut in half, it is quartered. The square of 2 is 4. If you tripled the distance, the light would be 1/9 in power. Four times the distance? 1/16 the amount. Notice that correlation: double (2x) and the power is 1/4 (4 is the square of 2, inverted it is 1/4). Triple (3x) and the power is 1/9 (9 is the square of 3, inverted it is 1/9). It keeps going. But at some point the light rays in relation to the subject are parallel (i.e., the sun to the earth) so the brightness is equalized as the beam is no longer expanding and appears constant even when our subject is a few feet from the camera and the background is a mountain a mile or more away.

While Mark defined the law and showed examples of how it works, I thought that a different diagram might help explain it. A few years ago (2005) I drew this little diagram to help describe inverse square: 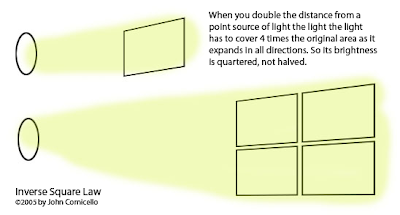 While composing this I noticed that Wikipedia has a similar, but more detailed illustration.

As you move away from the light source, the light energy doesn't lessen, but it has to cover a greater area, so appears to be less powerful. You can easily demonstrate this for yourself with a flash light. Hold the flash light a few inches from a white wall in a dark room and see the narrow beam of light hitting the wall. Then walk away from the wall with the flashlight and note  how the beam of light gets wider as you move back.

The effect is not limited to studio lighting. It affects all lighting: household lamps, the headlights on a car, etc.


One thing to keep in mind here is that the law applies to a point source of light, such as a candle flame. We rarely deal with a point source of light in our general photography. A far away light such as the sun approaches becoming a point source, but as mentioned earlier, it is so far away that the effect of the law is negated. Mountains in the distance are receiving the same amount of light as the valley, relative to the distance from the sun to earth.
As the light becomes larger (light bulb, bare flash head, umbrella, softbox, etc.) the falloff is not as extreme, but still approximates the effect of the inverse square law. So, if you are using a large softbox and double the distance between the light and the subject and measure it with a light meter it will not be as drastic as 1/4. But it will still fall off quicker than you may expect.
In practice, you probably don't need to know the law intimately, but if you are lighting a scene, you should keep the concept in mind. You can use it when you need to either flatten out the light in a scene (make the background match the subject) or when you want to make a background go dark in relation to the subject. To make the background match the subject move the light back away from the subject. To make the background go dark, move the light in as close to the subject as you can.

And for more on light to subject distance, refer to my blog post from October 2009.

Looking forward to seeing Mark at CreativeLIVE later this year!

Posted by cornicello at 4:28 PM