This is my continuing "rant" on understanding lens focal lengths. I last wrote back in September and October 2009. Maybe most people don't find it important, but it is one of my big pet peeves when I hear people talk about telephoto "compression" or there being a specific focal length lens for portraits. Or for landscapes. Or for anything. They make it sound like different focal length lenses have magical properties to cause these effects. All focal length actually does is determine (along with the camera film/sensor size) magnification. I apologize in advance, but I'm going to repeat myself on a few concepts within this post because I think these concepts are important to understand. The big one being "camera-to-subject distance." And, yes, there are things like fisheye lenses that do have different properties, but we're not talking about fisheyes here.

Going back to my photography classes in college in the mid-1970s, it was driven into me that the camera-to-subject distance determines the look/perspective (the relationship between items in the scene). Whether that relationship be a farmhouse with rolling hills behind it or the nose and ears on the face of a portrait subject. What I learned was, that no matter what size camera you use (35mm, medium format, 4x5, 8x10, etc.) you set the camera to subject distance and then you select the lens that fills your chosen format/frame the way you want. As a side note, this is much easier to do these days with high quality zoom lenses than it was back then with just a few fixed focal length lenses. As back then, you can still use a shorter focal length lens (letting more into the frame) and then crop. But that still can cause a loss of quality due to the cropping/enlarging.

As I mostly photograph people, I'm going to talk about portraits. But you can apply the theory to other types of photography. So, let's start with the adage that 85mm to 135mm lenses are the "portrait" lenses. I agree. But not because of their focal length. But because of the distance you have to be from the subject to fill the frame for a portrait.

We are all familiar with the exaggerated size of someone's nose in a photo that was taken from too close. In 99% of these situations, the lens was a wide angle, so the wide angle lens gets blamed. But the wide angle lens doesn't have a magical property to it that causes this perspective distortion. It happens because the photographer came in too close to their subject. Something that a wide angle lens encourages us to do and something that you can't always do with a longer lens due to its limited field of view and its extra magnification. So, we associate this with and blame it on short (wide angle) lenses.

Here is a set of photos that should set this straight. I don't really like using a mannequin for examples, but it does help keep down the variables when comparing lenses and framing. It is much easier to keep the mannequin from moving between frames than it is for a live subject.

Each of the four images below was taken with a different fixed focal length lens (24mm, 50mm, 85mm, and 135mm) on a full frame sensor camera. The camera was mounted on a tripod and was NOT moved between images. The camera-to-subject distance remained at seven feet. What changed is that the photos taken with the shorter lenses were enlarged more so that the framing was the same between images... 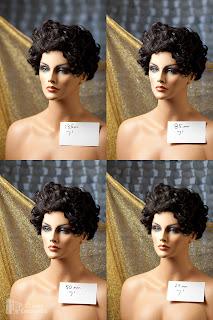 Take a look at the various relationships in the image. Nose to ear. Hair to gold background. Hair to patterned background. They all remain the same. If they weren't labeled, I think any of us would have trouble figuring out which one was taken with the 24mm wide angle versus the 135mm long lens.

When we see the original full-frame images there is no question as to which is which... 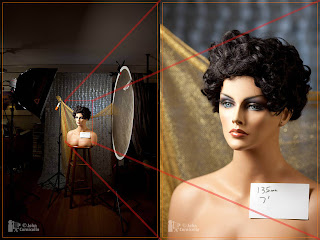 We can now see that at a particular camera-to-subject distance, two images taken with different focal length lenses will have the same look/perspective in the section of the image that is common to both images.

On the other side of the equation, what happens if we move the camera each time we change lenses so that the size of the subject's head remains about the same in each image? Here is the visual...

Now I think you will find it pretty easy to determine which image was taken with a short lens versus those taken with a long lens. Here we can see that coming in to being inches away from the subject with the short (24mm) lens causes the elements further from the camera to fall away in size quickly. This is the perspective we get from being in so close. The relative distance between the camera and nose (about 15") and the camera and ear (about 19") is pretty large at this close distance. The short lens allows us to get in close to get that perspective, but doesn't cause that perspective.

At the other end, at 300mm the relative distance between the camera and nose and between the camera and ear is pretty much the same (133" vs 137"). Notice that the apparent depth of the face changes dramatically as the camera is moved back away from the subject. Again, this is not because of the lens used, but because of the camera-to-subject distance. At around 4.5 to 6 feet (where you would use a 85 or 100mm lens with a full frame camera) you get a nice pleasing perspective. The nose is not rendered too large, the relationship between the nose and ears is pleasing. There is a nice roundness to the cheeks. As you move back, things flatten out.

As you move further back to 7 feet or more, the face flattens out and looks a bit heavier. Let's take a close look at the 24mm and 300mm images taken at different distances so that the subject's head remained about the same size in each... 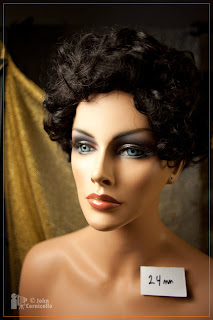 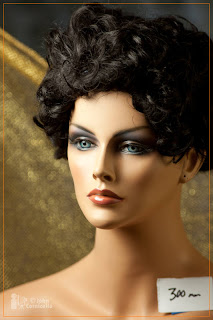 By thinking about camera-to-subject distance it becomes easier to move between different format cameras. At 5 feet from the subject you might use an 85mm lens on a full frame 35mm camera. At the same distance you would use a 50mm lens for about the same framing on a crop-sensor camera. If you move up to a medium format camera you would still be at 5 feet, but would then need somewhere around a 135mm or 150mm lens for similar framing. That all sounds reasonable. Where some folks get weirded out is with smaller cameras. Using a digital point and shoot, you may only need a 10mm or even shorter lens to get that same framing at 5 feet. The perspective remains the same, no matter which camera/lens you use because that all important camera-to-subject distance stayed the same.

It is beyond the scope of today's post, but you might want to also take notice of the depth of field between the various example images. In the set of 6 images taken with different focal length lenses, but framed similarly, the DOF appears to be about the same. Even in the 24mm and 200mm images show the same DOF. All except the 300mm image were taken at F/2.8. The 300mm image is at F/4. Things that make you go hmmm.....

But that's for another day!

Posted by cornicello at 9:25 PM