The Habit Return to Seattle

A couple of months ago I got hired to take some publicity photos for a Seattle-based comedy group named The Habit. It seems they had been on hiatus for a number of years and were planning a big comeback show for September. 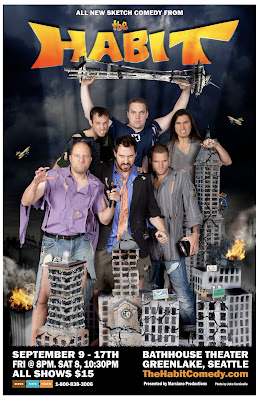 I knew one of the members, Mark Siano, through Larae Lobdel who some of you may know as PhotoSister and others may know as the social media and marketing person at Black Rapid. I had also photographed him last year when he starred in the 2010 production of Cafe Nordo Sauced. Through Mark we set up a photo session at his place for a Sunday afternoon. Luckily his place has a large garage that we were able to use as a studio. We weren't quite sure what the weather was going to be that day.

On my first meeting with Mark he started talking about the concept. The five members of the group tromping through a city, wrecking havoc. I just had to supply the photo of the group and they would add the city and effects in Adobe Photoshop. "Why go through all that trouble?" I asked Mark, "I just happen to have a set of sky scrapers and other city buildings in my basement. Compliments of Tasty in Greenwood who used them in a window display about a year ago."

Being there were going to be 5 people, I opted for some large lights. A couple of Speedotron heads, one in a 60" Photek Softlighter II for the main light on camera left and the other in a Westcott 7-foot white umbrella for fill light next to the camera. We did some individual photos and some group photos for use on the web site and on the poster.

This afternoon the final poster and show dates were released and here are some of the photos from the session. Unfortunately, I didn't get any behind-the-scenes images this time. Too busy wrangling 5 comedians!! 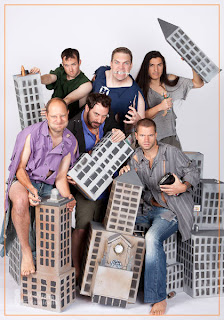 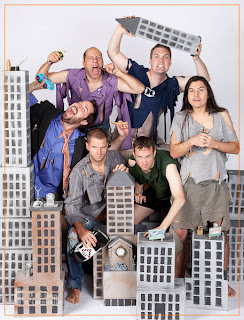 Thanks to Jeff Schell for taking my photo on white seamless and turning it into the grand poster for the show.