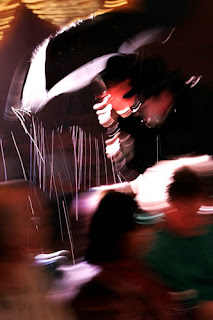 The sound was even better tonight than last night (Walter moved some stage monitors around and re-routed some signals). Bob Malone borrowed my piano and played it like it has never been played before. Great act!

Hacki and Moeppi got caught in the rain (it is the MOISTURE festival, after all), as seen in the photo.

I had to leave before the second show with Circus Contraption. But they are there again tonight for the 10:30 show. Come out and see a show (or two!).

Posted by cornicello at 2:17 PM