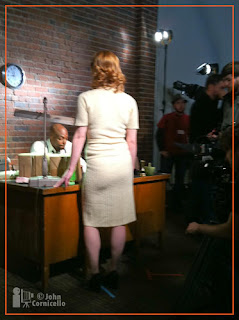 On Sunday, March 6, I was the gaffer on a CreativeLive workshop with film maker Vincent Laforet. If you read my last post you know that on Saturday we filmed a short documentary that we lit with a mixture of window light and daylight balanced lighting units.

On Sunday we moved over to another set and worked with tungsten lights. I didn't get to take many photos (just the one above) on this set because it was much more complicated and I had to keep on my toes during set up and filming. But I've drawn out a diagram of the set here: 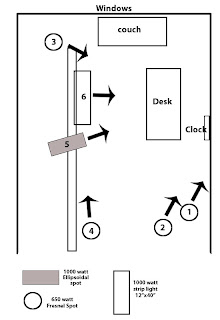 You can see that we had three walls. The back wall was a bank of windows that we covered up with sheets of foam core to keep out the daylight as it would have overpowered our set lights and gave everything a blue cast because we were color balanced for the much yellower tungsten lights.

What Vincent really wanted was to have an overhead spot light over the desk. But we had 20+ foot ceilings with no access to a power lift or a giant ladder. So we used a 1000 watt ellipsoidal spotlight (#5 in the diagram) on a very tall C-stand pointing over the wall we had built on the left side of the set. This was probably the scariest part of the workshop. We had this heavy light raised about 18 feet into the air. Moving that light stand around to position it was tricky. We had three of four sandbags on the base to lower the center of gravity. I'm glad we've taken that light down and don't have to deal with it any longer.

We then added 4 650-watt DeSisti Fresnel spots with barn doors for accents. I wasn't able to find the DeSisti lights to show, but they are very similar to these Arri Fresnel Lamps that I have used on other projects. #1 pointed at and skimmed the brick wall behind the desk, illuminating the side of the clock on the wall. That still left the clock face dark, so #2 was added to light up the clock. #3 provided a pool of light on the packages on the desk and filled in some shadows on the front of the desk. #4 added a slash of light diagonally on the wall and was aimed at the door handle.  You can see two of these 650s in the photo at the top of this post above the crew members.

As one of the actors was going to be filmed at the door, we added a 1000 watt light in a 12"x50" strip light (a narrow softbox) above the door, pointing down to his position. The lamp head was a Photoflex Starlight QL in a Westcott strip bank.

This was our basic set up for the establishing shots and the action shots taken looking towards the desk. When we turned the camera around to to the reverse angles (seeing the female actor's face, and the male actor going to and from the door) we added a Litepanels Bi-Color light in beauty light position (almost directly over the camera) for the female and re-purposed light #2 from the diagram to point towards the door in the wall, being diffused by the 4'x4' opal diffusion screen that we used yesterday with the 800w HMI light for the male to light his face and separate him from the background wall and door. The Litepanels Bi-Color allowed us to dial in the warmer color temperature we needed to balance with all the tungsten lamps on set.

We then finished up detail shots, such as a closeup of the male actor's hand going to the telephone and a close up of the packages on the desk using the Litepanels and moving them around as needed to give the light we wanted.

At this point, I don't know if the narrative will get edited and uploaded. If it does, I will be sure to post a link to it in a future blog. But in the meantime, I have a couple of YouTube videos showing the crew blocking the scene and the actors in place:

Posted by cornicello at 5:30 PM