I want to start this article off with a big thanks to Celeste Olds and the CreativeLIVE crew and to Vincent Laforet and his crew of Marcus Del Negro and Justin (sorry, I never got your last name).

This all started a little over a week ago. I was in Las Vegas at a Scott Bourne and Bambi Cantrell workshop and I received a message from Celeste that she wanted me to come in as a gaffer on the Laforet workshop. My initial reaction was panic. Gaffer? I'm a still photographer. Yes, I can light things. But I don't know all the technical terms that the film industry uses. I use extension cords, not stingers. I called Celeste on a break and expressed my doubt. She kindly ignored it. So I told her, OK, I'll call Vince and talk to him and see what he thinks. Celeste told me to go ahead and call, but don't sell myself short. At this point I'm still thinking that Vince is going to ask me some questions and say, "Next!" But I moved ahead with it.

I called Vince. I told him I was a "stills guy" but had done some work on a 48-hour film and some other set lighting. He asked for my website and said he would call back in a few minutes. He did. He mentioned that we'd be going for a film noir shadowy look in one of the pieces for the weekend, he liked the lighting on some of my figure photography. And then he  asked to have Marcus call me back to go over the gear list. Uh, Oh! Sounds like I'm in.

I worked with Celeste and Adam at CreativeLIVE to assemble their gear and some extra equipment rented from Glazer's Camera in Seattle (just a few blocks from the CL studio). We were able to get some of the things that Vince and Markus requested. We also had some equipment similar to their requests. Not quite everything, so still a little nervous.

Vince and I got to meet for the first time on Wednesday evening. We looked at the spaces available and decided on the daylight side (Chase Jarvis's studio) for the documentary and on the CreativeLIVE side for the narrative. A little relief! The lighting for Saturday was going to be relatively easy. But the narrative...

As Vince mentioned on Sunday, there were a number of challenges. We had a 20' foot ceiling and no lift or tall ladder. We wanted to light directly from above with a spot and some diffusion. But that just wasn't going to happen considering time and budget. What to do. We will light from off to the side and high up. We had light stands that could go up high enough. But what about adjusting the light? This is where it got scary. CreativeLIVE has a balcony in the studio. So I mounted a heavy ellipsoidal spot light that I brought from home on a Hi-Hi stand with a heavy duty boom arm. Loaded the base with sand bags, enlisted a couple of other folks from the crew and hoisted the light up to the height we wanted. I then rolled the still top heavy stand over to the balcony. Made adjustments, rolled it back to the set. Changed my mind. Rolled it to the balcony, final adjustments, back to the set. Standing on the balcony was OK, but holding onto the light as it swayed back and forth way up there was disconcerting. It was just as bad on Sunday night when we disassembled the set. It wasn't a paralyzing height fear. I was able to do what I needed to do. It was just plain uncomfortable. Even more appreciation now for all my aerial artist and rigging friends. You are all amazing.

Anyway, I've now gone totally off my original topic/theme for this post. I started with thanking the crew and wanted to talk about being on a crew and how different it can be from still photography working on your own. I guess another post is coming up later today. But I do want to reiterate my thanks to Vince, Justin, and Marcus for making me feel totally a valuable part of the crew. Thanks, guys!!! 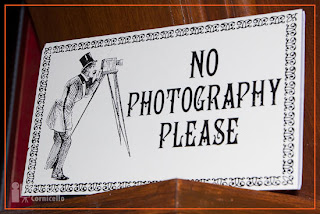 Sure wish I had taken some photos of us setting up. But we were on a tight schedule, staying around til after 11pm on both Friday and Saturday nights to get the sets constructed and lit, while anticipating an 8am call time the next day. So I appologize for all this text.