Earlier today I presented a class on photographing fireworks for creativeLIVE. You can watch the class for free on the creativeLIVE site or watch the embedded YouTube video below. In addition to the video, I'm presenting my notes that I used to prepare for the class. Hope you enjoy the class notes... 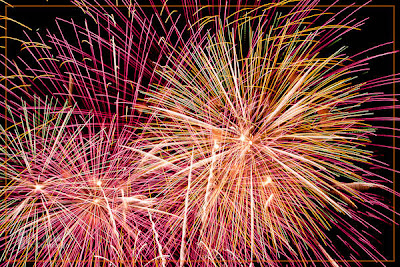 There are three main things to keep in mind when photographing fireworks: Location, Stability, and Exposure. Let's look at each of these, starting with...

LOCATION:
If you are lucky, you can get to scout the location of the fireworks in advance. If really lucky, you can scout it during the day and during the evening. You will want to look for clean views with no overhead electrical wires or street lights or other clutter.

Once it is dark out, it gets difficult to see clutter items like this until you look at your photos and see these annoying black silhouettes blocking out some of the firework display. 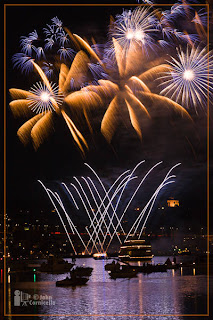 You will want to see if there are landmarks you can use to establish a setting and help tell a story. Look for bridges, distinctive buildings, landmarks like the Seattle Space Needle or other towers that can give a sense of place.

Try to anticipate the wind direction. In a large fireworks show there will be a lot of smoke building up as the show progresses. If you know the general wind direction, you can try to be in a location that is upwind from the display or where the wind blows across getting the smoke to move off to the left or right and not mar the image.

Considering the smoke issue, it is often best to get your wide, establishing shots near the start of the show before too much smoke builds up. As the show goes on the displays often get bigger and more varied. As that happens you might want to zoom in or switch to a longer focal length lens to take more "close-up" "portraits" of the fireworks.

The next thing to consider is...

STABILITY:
This is the time do dust off the tripod that you always promise yourself you will use some day. If you don't have a tripod, look for other ways to steady your camera. Maybe a beanbag on a fencepost or a tree stump. We'll talk about gear in a few minutes on another slide.

It also helps to have a remote shutter trigger of some sort. This could be a cable release (which are usually electronic) or a radio trigger (gets expensive). A simple remote release is all you really need. Most have a way of locking the button, too, which we will talk about when we get to Exposure.

Another item related to stabilizing is to get your focus set and locked, especially on compact or point and shoot cameras that may have shutter lag (where the camera takes a second after you press the button to focus and fire.

If your camera has manual focus, use the first burst or two of the show to get the camera focused and lock it there. 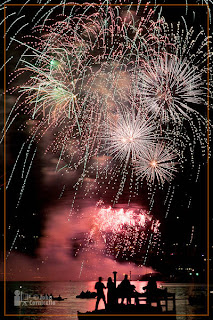 EXPOSURE:
Yes, this is probably the easiest part. Fireworks are bright! You don't need a high ISO setting. Go for ISO 100 if available. 200 if that is the lowest your camera can set.

The exposure is going to be mostly controlled by your aperture (f/stop). Typically, the recommendation has been F/8. But fireworks have been getting bigger and brighter, so I now find myself using f/11 and sometimes f/16, depending on the brightness. This is the time you might want to take a look at your LCD between frames to see how it looks. But don't spend too much time looking, as you may miss some great exposures. Take a quick peak and determine if the fireworks are too bright or not bright enough and make aperture changes to compensate. If they're too bright, stop down the lens (go to a larger aperture number, which is a smaller aperture). If they are not recording well, open up to a lower number (larger aperture). This is another one of those situations where there is no one correct answer. Expose to your taste.

There are a variety of ways to handle this. You can try using 1/2- to 1-second or longer exposures. Open the shutter as the firework streaks upward. But for more control, use the BULB setting on your camera, if it offers that. Bulb is usually available on SLR cameras (digital or film). But may not be available on compact or point and shoot cameras.

I often get the question, "what doe Bulb mean?" This goes back to the old days of photography. The shutters on old cameras were air activated. There was a flexible tube that ran from the shutter to an air bulb on the other end. The photographer would squeeze the bulb to force air through the tube and that would fire the shutter. Some shutters didn't offer shutter speeds. They just stayed open as long as the air pressure held them open.

To use the Bulb setting on a modern camera, first find out how to activate it. Some cameras may have a specific Bulb setting on its mode dial (where you select manual, aperture priority, shutter priority, etc.). Some may offer it in the Manual mode when you dial your shutter speed down. 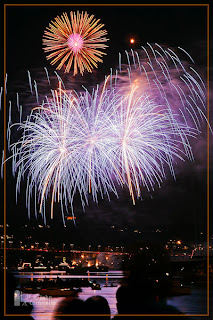 Once it is set, have the camera aimed and ready to go. Hold a black card in front of the lens and open press and hold the button on your cable release. The black card now effectively has become your shutter. Move the card away for a second or two to capture the firework, then cover the lens again to stop the exposure. Here is where you can also do multiple exposures. Don't let go of the shutter button (many cable releases have a lock available). Wait for another burst in the same vicinity, then move the card away for another second or two to capture that burst. You can repeat this a few times, but the more exposures you take this way on the same frame, the more light will build up in the foreground and background. It is a balancing act. Again with no right or wrong answer. You need to experiment with it.

I should also mention flash now. Turn it off on your camera. The flash won't help with the fireworks (they are already brighter than the output from your flash). But it will tend to annoy the people around you.

Now comes the part you're all waiting for...

GEAR:
First off, you need a camera. Most any camera will work for this. dSLR, compact, point and shoot, even your phone camera can capture something.

Lens choice: A zoom lens comes in handy here. You are probably not going to be able to be running around trying different vantage points. When photographing fireworks you usually find a spot to work from, set up the tripod, and stay there for the duration. A zoom lens will let you change the framing of your shot from wide to close up from that vantage point. The other option is to have a bunch of lenses of different focal lengths. But then you end up wasting time changing lenses and possibly missing great shots.

A good general purpose zoom lens would go from around a 24mm to 100mm full frame equivalent. That would be maybe a 16-85 range on a crop-frame sensor. But, depending on the situation, you may want to go with an even longer lens in the 70-200 range if there aren't many or any wide shots available. Then all your images would be close ups of the bursts. 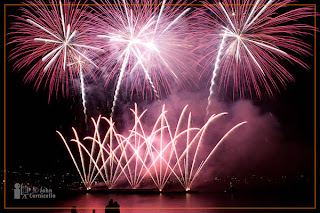 A zoom lens can also offer some creative possibilities, such as zooming during the exposure.

A question I get about focal length is about "telephoto compression." That only applies if you are able to move back a long ways. And it is the act of moving back away from the subject that causes the compression. The long lens just narrows the field of view. If you are in a fixed location, the focal length of the lens will just affect field of view (what fits in the frame). The so-called "compression" will be the same for the area of the scene that is common to any focal lengths you use. If you photograph with a short lens and then enlarge the center section you will have the same perspective as if you had used a longer lens. But quality will suffer from the enlargement.

If you are in a situation where you can be a long distance from the fireworks (a mile or more) and have a long lens and an interesting background you can get some interesting photographs.

Once you are set with the camera/lens combo, there are a few other items to have on hand. One is a small flash light to help you with camera settings as it gets dark. Also have your batteries charged and also carry some spares. The longer shutter speeds can deplete the batteries faster, thought that might depend on the technology in the camera. Also have a set of memory cards ready to go. Format them all before the show starts. You don't want to be changing cards in the middle of the show and discover that the new card is already full and needs to be formatted. Another item you might want is a set of earplugs. Fireworks can be very loud (though that is often part of the fun and excitement of them).

Tripods are often a personal choice. You need to find a balance between weight, stability, and portability. The best tripod in the world doesn't do you much good if you leave it home or leave it in the trunk of the car. Find one that is comfortable for you to carry, set up, and use. Get one that is appropriate for your height. If you are a tall person, you will want a taller tripod. Also consider the heads available. For years I didn't like ball heads. I wasn't totally crazy about pan/tilt heads, either. But I found them easier for me to use. What I didn't like about ball heads was the way the camera was attached away from the ball, extending out the center of gravity. This also necessitated using L-plates to mount the camera vertically. And those could get in the way of battery or memory doors, or of cable attachments. Recently I found two options that mount the camera closer to, actually mount the camera to the ball part and alleviate most of my complaints about ball heads. There are the horizontal joystick series from Manfrotto (I use the 322RC2 model) that are pistol grips and ones from Arca Swiss (Monoball P0 or P1). Like tripods, the head you use is a very personal choice. Try a few out before plunking down the money.

It may also be worth considering weather precautions. Here in Seattle, summer usually doesn't start until July 5. We often have rain or mist on July 4. I carry a simple plastic camera cover available in case the weather turns. These are available in most camera stores where you get the covers for less than $10. They are called Rain Sleeves from Optech.

So, that about wraps things up. Let's get one more bit of advice from my mom... 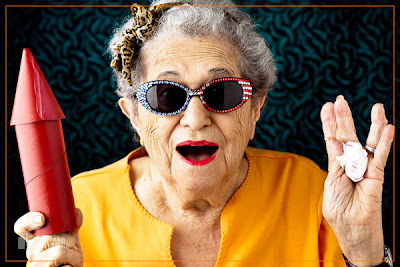 HAVE FUN!!
You can find more of my fireworks photos online at photos.cornicello.com

Posted by cornicello at 9:20 AM