Followup on the Experimental Portrait class

Working with the CreativeLive folks last week was a great experience. One I hope to be able to repeat in future workshops.

With this, I have now experienced the CreativeLive classroom in three major ways. I've been in the online audience, I've been in the live audience, and now I've been part of the broadcast. This bring a varied perspective on how the audience interacts with the classroom. Now that I can look back on the videos of Jeremy Cowart's Experimental Portrait workshop, I see there were some online chat questions that didn't get answered, or I heard some side conversations and questions from the live audience, and I see that the online audience could not hear some of the questions I answered. As I watch through the videos I will try to answer some of those questions here in the blog.

But first, some comments on the live chat. We (the instructor and assistants) cannot see the chat questions coming in. We rely on the amazing chat hosts, like Kenna and Susan, to relay questions to us. They have to cull through the rapidly scrolling chat comments to pull out relevant questions and try to get them to us while they still make sense, yet not interrupt the flow of the class or send us off into tangents. A great big shout out and THANKS to the chat hosts.
BEAUTY DISH
I noticed in the first video session where we were using a beauty dish as a main light with a 7" grid hair light and ringlight for the background, someone online asked a question about lighting ratios. Jeremy turned the question over to me, but I didn't have a microphone, so it never got out to the listening audience. Basically, what I said was that there was no lighting ratio here. Lighting ratios usually refer to the balance between the main and fill lights. Here we only had a main light. No fill light, so nothing to compare and ratio. I joked that it was probably something like a 100:0 ratio.
My own personal thoughts on lighting ratios is that the numbers don't really matter. When I light something or someone, I just look for the visual relationship between the highlight and shadow sides. Just make it look good for what you are trying to get across to your audience. 1:1? 2:1? 4:1? That's too much to think about in real world commercial work. How many times have you taken a family portrait and had someone in the photo ask what the lighting ratio was? I've been working with cameras since 1971 and never paid any attention to lighting ratios. For me, they are just filler in text books and math that I don't want to think about. Make it look good, don't worry about what the numbers are.
Someone asked if we had a white or silver dish. It was white. I've never used a silver beauty dish myself, but would expect it to be a little more directional/contrasty. I also showed the grid off the dish so that the audience could see what happens when looking through a grid to see how it cuts off the outer edges as it is angled towards/away from the subject. Not sure if that came through, because it was just visual, with no voice over.
Speaking of grids, at another point someone asked the difference between grids and snoots. They both narrow the beam of light. But snoots have a hard edge while grids will "feather" off around the edge of the light.
We also said that at some point we would show a "before/after" of a beauty dish with/without the grid. Life got in the way, and we never got to show that. I will take some test shots in the next few days to show that difference.
UPDATE: New blog post added showing the beauty dish examples
FLASHLIGHTS
Another question I heard without hearing the answer make it across the wires was "why is John holding a flashlight there" when we were doing the shot with the silver Mylar wrapped around the model's head using a ring light. The simple answer was that the ring light we used didn't have a modeling light, so I shone the flashlight on the model's face to make it easier to see to focus the camera. The flashlight also let us have some control over the model's pupils. With no direct light on her, her pupils were very dilated. Shining the light on them caused them to shrink a bit.
My personal thoughts? I like a medium sized pupil in my subjects' eyes. I don't like a totally dilated pupil that shows very little iris. I love the colors and designs in the iris of the eye, and think that is where the soul of a portrait resides. If the pupil is too small, though, it doesn't look natural to me, either. So I go for the mid-sized pupil.
Some folks will say that the large/dilated pupil is desirable because when we look at someone we love our pupils tend to dilate. But I still find it distracting to see a giant black pupil with little iris color around it. It probably boils down to personal choice, but I will spend more time looking at a photo with attractive irises and tend to move away from photos with dilated pupils.
For those working with speedlights with no model lamps, this can be an issue. Here is another place where the flashlight comes in. If your subject's pupils are too dilated due to low light levels in your shooting space you can shine a light at the subject to get their pupils to close down a bit. I've seen some photographers mount a small LED flashlight to their camera (I have one that screws into the tripod mount on the bottom of the camera) that will provide enough light to get the eyes to look good, but not interfere with the actual exposure. 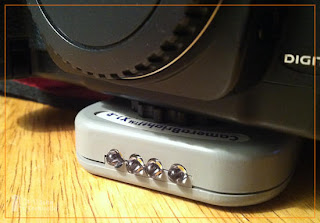 Enough for today. Be on the look out for the beauty dish samples. And soon I will talk about white balance and catchlights in another post.
Posted by cornicello at 5:15 PM