Another question that came up during the Experimental Portrait class was "what is the difference between using a grid vs using a snoot?" I commented during the class that the grids had softer edges while the snoot had a harder edge to the light.

In this next sequence I just moved the camera back a bit so that you can better see the edges of the light.

And a set of images of the grids and snoot pointed at a blank wall to better see their patterns:
In case you are not familiar with these items, here are photos of the reflectors, grids, and snoot... 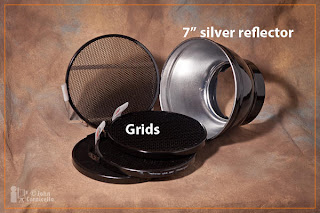 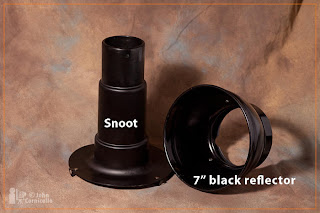 The snoot is basically a black tube that goes in front of the flash head to narrow the light output. The grids have a honeycomb pattern of metal (usually aluminum) that narrows the light beam. On-axis a lot of light can go through, but as you move off-axis the light is attenuated.