About a week ago I got an 84" silver PLM* from Paul Buff (Alien Bees/White Lighting). I haven't had a chance (or the room, this is a very large item) to really give it a good test, but this evening I had some time available to do a set of comparison images with the PLM and a few other light modifiers. The PLM is mounted to the light using the new speed ring assembly that I modified to fit my Speedotron flash heads.

I will start by saying that I really don't like using a mannequin for lighting demonstrations. The surface of the mannequin doesn't mimic skin, and the eyes have painted in catch lights. But it does allow me to have a "model" that doesn't move between images while I'm changing out the lights. So, when looking at the following examples, pay more attention to the edge of the shadow that the mannequin casts. See which lights will give you harder or softer shadows.

The mannequin in this series is 18" in front of the background. This is much closer than I would normally place a portrait subject. But for beauty or experimental work I might sometimes have the model right against the background. The light stand is 117" (9.7 feet, 2.3 meters) from the nose of the mannequin. The light is situated just over my left shoulder, almost straight on to the mannequin in all but the last image. The last image is with a ring light, so the camera is on axis with the light.

All but the last image were taken with a Speedotron 805 power pack at its lowest power setting for one lamp head (50 watt seconds) going to a 202 flash head. The last image was lit with an Alien Bees ring light at its lowest power setting. The light stand is in the exact same position, though it was lowered a few inches for the last image (ring light). The power pack was left at the same power level for all photos. The aperture was adjusted to get proper exposure (I took a series of bracketed shots and selected the best from each series). The aperture each image was taken at is shown in the examples below. This should give you an indication of the efficiency of each modifier.

There were no fill/bounce cards. Just the one light.

I converted to black and white so that the color of the mannequin and background and slight differences in the color from each modifier wouldn't affect perception of the shadows. I've also included a color version to give an idea of the difference in color between the various modifiers on the lamp head.

I hope to soon get to do a set of examples of the PLM compared with other modifiers with a full length subject and more distance between the light and subject and between the subject and background. Just need to find the space to do it in...

ADDENDUM: Adding a photo of the PLM with the Speedotron head (this photo was taken before modifying the adapter plate, so it is attached like an umbrella). This is shown in a standard 8' ceiling room to give an idea of the size: 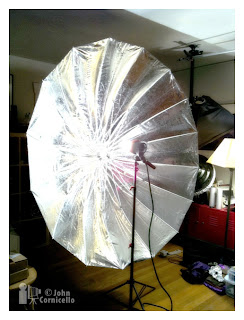 If there is a comparison you would like to see please let me know.

PS: I've had some questions about adapting the PLM to a Speedotron head. Here are a couple of snapshots of the modified Speedotron speedring: 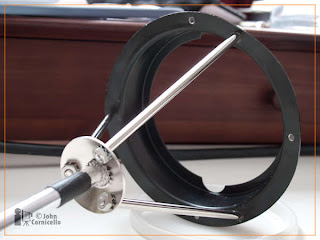 Here it is attached to a 102 lamp head 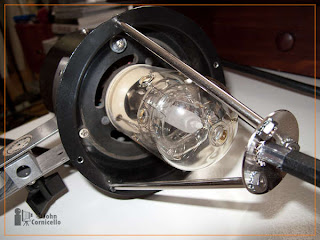 Posted by cornicello at 9:47 PM