For me, eyes are the center piece of a great portrait. I want to see life in the eyes. I also want to see a catch light. The catch light is the highlight reflection of a light source on the outer surface of the subject's eyes. Pretty cut and dried.

I've seen a number of articles saying that catch lights should be round. The roundness would mimic a reflection of the sun, which is round. I don't agree. I don't think that we really notice the sun reflection in the eyes of someone we are looking at. Instead, I think of catch lights as mimicking a window or a doorway. These are usually rectangular shapes. So I often prefer the look of a rectangular softbox catch light. Even outdoors, I think we are more likely to notice a large diffused sky as a highlight in the eye than we are to notice the sun. With a strong sun, the subject would usually be squinting, tearing, or looking off in a different direction.
Above is an eye with a rectangular catch light. Referring back to my comment about mimicking a door or window, I added some black tape across the face of my softbox to create these catch lights... 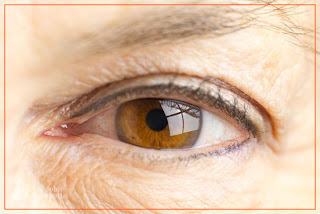 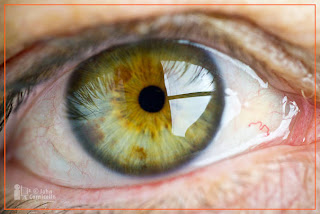 When using a beauty dish we do end up with round catch lights. But the catch light is large. Not a small point (as the sun would be).

Also note the size of the pupils in the examples here. For my taste, the one above is a bit too small. I much prefer the look of the pupil in the image below. I talked about this a couple of days ago in my post about using beauty dishes (see the FLASHLIGHT section). 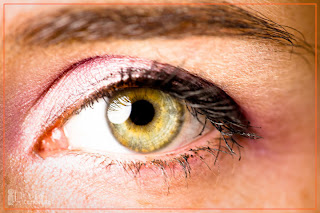 Then, of course, there are ring lights. This is a self portrait lit with an Alien Bee ring light with the 56" moon unit. Not something to use all the time. But a nice change of pace to use once in a while. 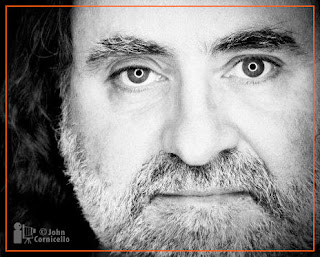 What about the number of catch lights?
Most traditional photographers will say just one light showing in each eye. Again, this goes back to the sun. There is only one sun in the sky. So one main light that reflects in the eyes. Personally, I don't usually notice multiple catch lights in photographs I look at. I much prefer multiple catch lights to no catch light at all. I think I will just let others fight that battle. Paraphrasing my old friend Bruce Fraser, "that is one hill that isn't worth fighting or dieing over."

Posted by cornicello at 2:06 PM